Posted at 14:23h in Cinema, Ideas and Inspiration, Proposals by admin 0 Comments

Paul pulled out all the stops for his surprise proposal to Karry. Months ahead, he enlisted the help and expertise of event planner Pastel Moment to make his proposal dreams come true!  He wanted the romantic yet epic setting of Waiheke Island’s Mudbrick Vineyard and Restaurant as the perfect backdrop, the “Will You Marry Me” banner pulled by the plane, down on one knee in front of their closest family and friends – even flying surprise friends of the Bride to Be from China.  Two weeks before the proposal, we did a sneaky video shoot at Paul and Karry’s place, to film part of Paul’s proposal (the little video you see Karry watching before the proposal), which included a message from Karry’s Mum and brother, who wouldn’t be able to make the proposal, but who sent their well wishes and blessings.

Under the guise of a Sunday trip to Waiheke, and a relaxed lunch at Mudbrick, Paul excused himself to suit up and contain his nerves while Event Planner, Queeny posed as the waitress, but instead of menus, she brought over the video message for Karry, and then guided her to the decorated rooftop balcony to wait for Paul.  Check out the rest of this amazing surprise proposal including amazing aerials from our friend at Brendon Dixon Films! 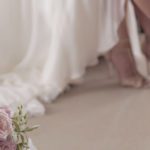 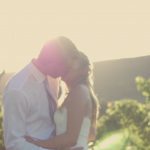 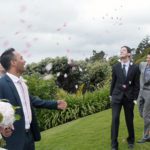 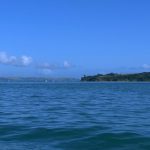